St Minver Community Land Trust (CLT) has brought on two successful phases of an affordable self build project, in an area where local people are priced out of the market. The CLT model means the homes will remain affordable in perpetuity, something that was important to the original legacy landowner.

St Minver Community Land Trust (CLT) have so far completed two phases of self build affordable homes on a rural exception site in the popular seaside village of Rock, Cornwall, one of the least affordable locations in the country. A

A first phase of 12 affordable self build discounted market sale homes were completed in 2008 and sold at 31.3% of open market value. A second phase, completed in 2011, involved a joint development with Cornwall Rural Housing Association (CRHA) and included 8 affordable self build homes, this time sold at just over a third of open market value, and a further 4 affordable rented homes owned and managed by the housing association.

The development is still regarded as an excellent example of rural affordable self build housing. The CLT is currently working on a further phase in the village, potentially of up to 20 homes.

“It’s a great opportunity to build your own home… especially for someone who doesn’t have any skills, to be able to provide a house and be able to say I’ve built my house for my son, is a great achievement”

The site is a rural exception site on the edge of Rock, a desirable coastal fishing village in the North Cornish parish of St Minver Lowlands. It is a designated rural area in the Camel Estuary Area of Outstanding Natural Beauty.

It’s popularity with second homeowners and tourists (half the homes in the surrounding St Minver parishes are holiday lets or second homes and in some places it is up to 80%) meant that local people, including young people and families, were priced out of the area.

The original site was Penmayne Farm, owned by local farmer David Wills. He was persuaded by the case made by local builder and parish councillor, Bill Dingle, one of the driving forces behind the CLT, of the need for affordable homes for local people.

He agreed to sell the site as an exception site for £10,000 per plot, amounting to £120,000 in total. Like many landowners, he was willing to sell his land to a CLT because of the model’s principles of providing affordable homes for local people in perpetuity.

Both phases would have been subject to the former North Cornwall District Council Local Plan 1999, although there is no online record of that plan.

The current local plan was formally adopted in November 2016 after both phases were completed. However, this plan includes Policy 6 on Housing Mix which includes a commitment to increase the number of self build and custom build homes provided, which provides a context for the CLT’s planned third phase.

The area is now subject to St Minver Lowlands Neighbourhood Plan, which includes support for self build. It states: ‘affordable and self build residences along the lines of the Dingle’s Way project will be encouraged for the accommodation of local people, with the Parishes working with Cornwall Council to have significant involvement in the allocation of both additional and existing affordable and social residences’.

The first phase of the development involved four 2-bedroom and eight 3-bedroom detached self build bungalows for local people.

Construction started on 1st October 2007. Contractors were hired to build the roads and the foundations of the properties. The homes were designed simply, with single storey bungalows meaning that residents with little or no construction experience were able to self build their homes. The build was overseen by the CLT and a Development Agent, Alan Fox, from the CLH enabler hub, Cornwall CLT. It was completed in December 2008.

The former North Cornwall District Council provided both a start-up grant of £5,000 to the CLT and an interest free loan of £544,000 towards the total build costs of £984,000, which was repaid from mortgages. Lenders accepted the value of residents’ labour as a deposit. The loan from the council was funded by proceeds from Second Homes Council Tax.

The homes were sold as freehold discounted market sale homes at 31.3% of open market value. To keep the homes permanently affordable and ensure they benefit local people in the future, the homes are subject to two resale covenants. The first is a right to pre-emption that gives the CLT the first right to purchase the homes at the point it is put up for sale. The second covenant is a resale price covenant that restricts all future sales to the same discounted market value formula that governed the initial sale i.e 31.3% of open market value.

The second phase started in March 2010. It was a joint development with CRHA and included eight 2- and 3-bedroom self build discounted market sale CLT homes and a further four affordable rented homes (comprised of 2-, 3- and 4-bedroom cottages and bungalows) owned and managed by the housing association.

CRHA provided the development finance, assisted with bridging finance and developed the eight self build homes to weathertight condition to be self finished by residents. Here Cornwall CLT acted as a technical adviser and development agent.

In this case, two of the residents were trained carpenters and another three were masons. The remaining three residents who were without construction experience acted as labourers to the masons. Completed in 2012, the homes were sold at 35.7% of open market value, with the same resale covenants that applied in the first scheme.

St Minver CLT was formed by a group of local residents, led by local builder and parish councillor, Bill Dingle, who is now sadly deceased and after whom the development is named. It was formally constituted in 2006 as a Charitable Company Limited by Guarantee and subsequently became a registered charity.

The CLT received technical assistance from the local enabler hub, Cornwall CLT, who provide enabling support to individual CLTs across the county and deliver affordable homes directly. To date they have delivered or enabled more than 230 affordable homes.

For both phases St Minver CLT agreed an allocations policy with the former North Cornwall District Council (which then became Cornwall Council in 2009), which included criteria on local connection and affordability.

The first phase consisted of single-storey 2- and 3-bedroom detached bungalows. It resulted in a cul-de-sac which provided a means to access a future phase should it be successful.

The second phase included a greater mix of housing types, both in terms of tenure (it included social rented homes this time) and size (three of the social rented homes are 2-storey homes). The self-build homes in the second phase remained single-storey detached and semi-detached houses in a similarly simple design as found in the first phase, thereby making self-build a realistic option for those with no or limited construction experience.

Both phases were completed by 2012. St Minver CLT have since been working on a third phase for a potential 20 affordable homes on a plot adjacent to Dingle’s way. T

here are already 50 applicants for the third phase but the CLT have faced a number of challenges, including concerns from the Parish Council that the scheme is not in keeping with St Minver Lowlands Neighbourhood Plan.

The CLT will make a decision in October 2021 as to whether to proceed with the third phase or not. They are being supported by Cornwall CLT.

St Minver is a great example of a pilot project emerging from local need and passion, that has then set the tone for subsequent activity. This could be the inclusion of custom, self-build or community led housing in local policy or in neighbourhood plans, as happened in this case. As well as its planning guidance – the Right to Build Task Force’s website also has a suite of Advice Notes, including a note on Policy, including Creating a Framework for Delivery, which provides helpful pointers. 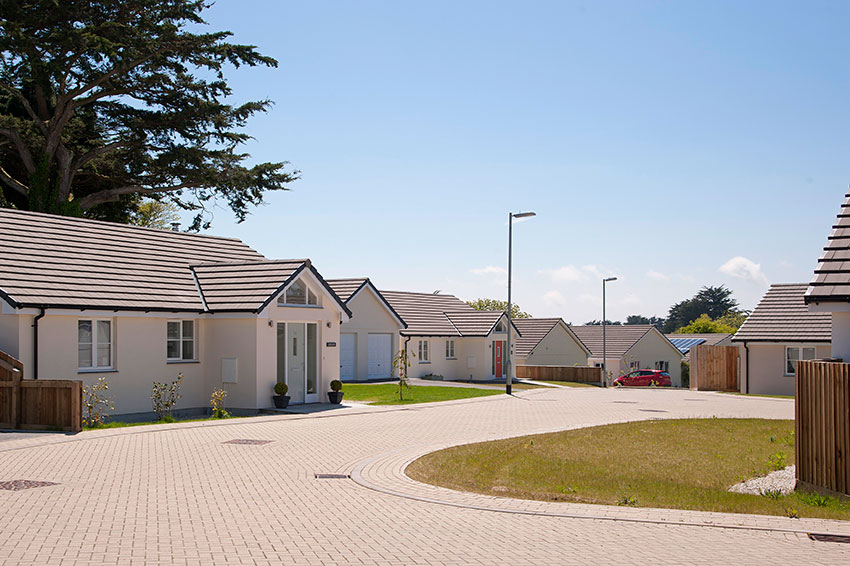